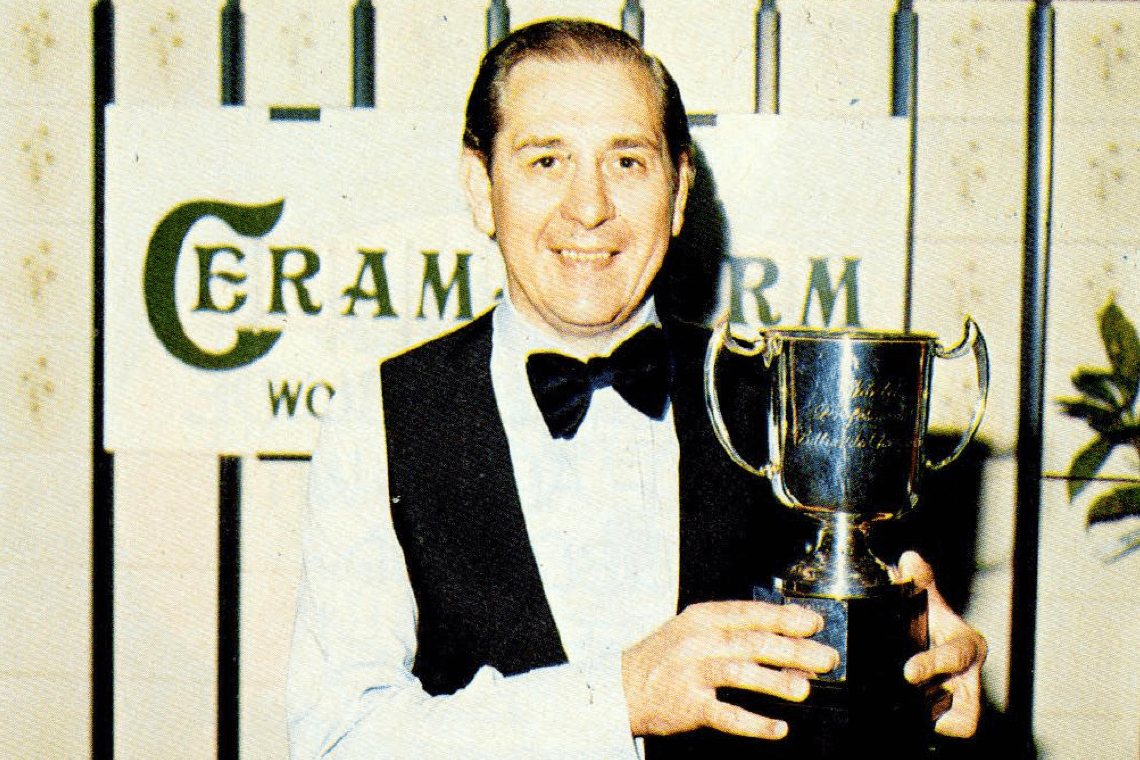 In part one of Tales of the Table last week, Rex Williams told us about how he first got into Billiards and Snooker, and the great potential he showed at a very early age. Rex made his first Billiards century after just three months, and his first 500 break after three years.

We continue by asking him more about his greatest moments in the professional game, how he mixed both Billiards and Snooker, and his advice for aspiring players.

What was your most memorable World Billiards Championship win?

“The first one would have to be the most memorable one, when I beat Clark McConachy in New Zealand in 1968. McConachy was an elderly man then but still a terrific player.

The heyday of Billiards was before the war. The five greatest players in the game were Walter Lindrum, Joe Davis, Clark McConachy, Tom Newman and Willie Smith. There were many other great players but those were the best. Davis and McConachy came the closest to Lindrum.

It was week’s match and very tight. We played two, two-hour sessions each day. The conditions very much suited Clark, they didn’t suit me. Clark was brought up on very slow tables because of the nursery cannons. With the present cloth today, you wouldn’t play nursery cannons, they are too fast, and you wouldn’t hold them together.” 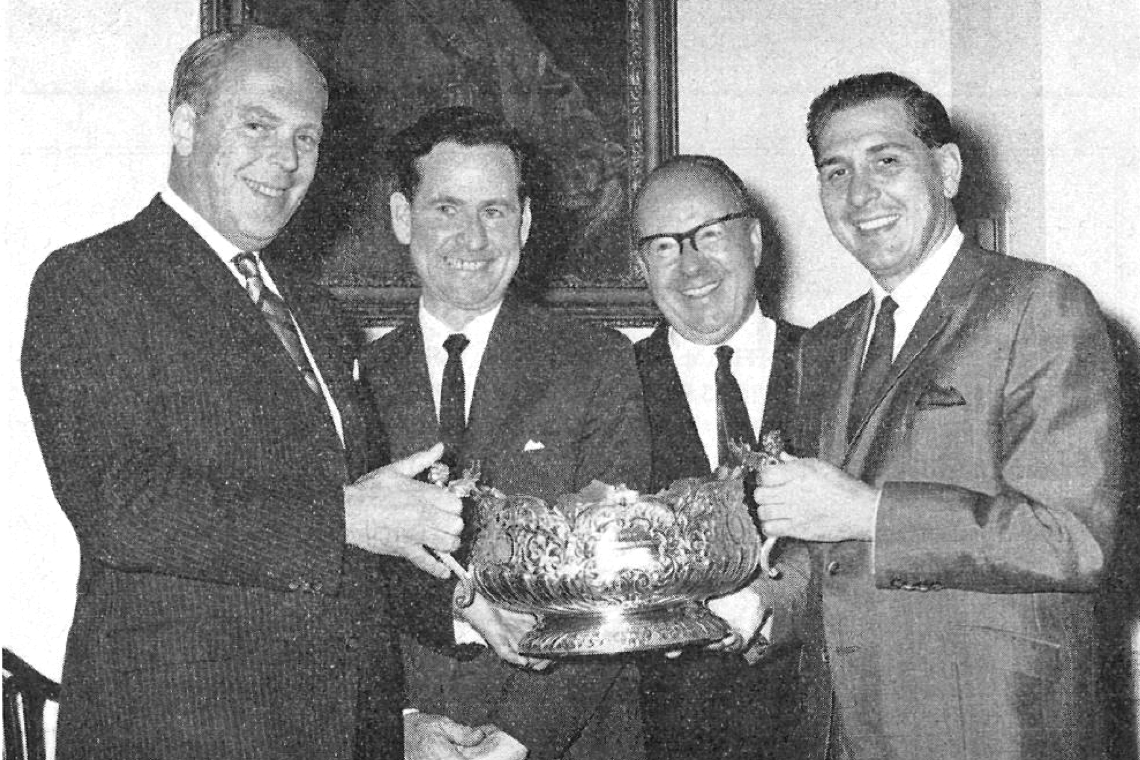 “It was slow cushions and slow cloth. If you put up a long in-off, with the red around the centre spot or just towards Baulk, you could not play the in-off and get the red back around the table, the table was so slow. The only way you could play it was off two cushions to leave the red by the pyramid spot. This made it very difficult for me and I didn’t play anything like I could have played if it was on the conditions that I was used to playing on, but of course we were playing in New Zealand and that was how it was set up.”

After defeating Fred Davis to win the 1983 World Billiards Championship, Rex then put his full efforts into Snooker, but in 1995 made an impressive comeback at the British Open Billiards Championship. At 61 years of age, his best years were behind him by his own admission. However, in this event, the game’s leading stars Geet Sethi and Mike Russell were taught a lesson by the ‘vintage’ Rex Williams, as he rolled back the years on the way to the final.

“This [1983 final] actually was the final time I played Billiards and I hadn’t played for a long time until I played in the British Open Championship losing to Peter Gilchrist in the final.

I was only a shadow of a player I’d been, but I still thought I could do something even then.”

What were your highest breaks in competition and practice?

“My best break in practice was 1174. When I used to play Billiards, I only used to practice Billiards for about two weeks before playing in the championship. I honestly couldn’t tell you what my highest break in competition was, but I made several 500-600 breaks. Although I can tell you that when I played Jack Karnehm for a week at Chelmsford, I averaged 85, which was quite an average. This was the only time I played Jack, and Jack was a great player.

I played Jack Karnehm for a week at Chelmsford, I averaged 85, which was quite an average…

I made the second 147 break in South Africa in Cape Town, this was recognised as the joint record at the time with Joe Davis. These were the only two recognised 147’s that I am aware of, that were made with the old, heavy Crystalate balls.”

What were your best memories from Snooker?

“I was a bit unfortunate with Snooker because by the time we played at the Crucible, I was 44 years of age then, there had been nothing played really for years and my best years had gone.

I resurrected the World Snooker Championship in 1964 and it was played on a challenge basis. The first challenge was John Pulman against Fred Davis. John beat Fred and then he beat him again. Then I played John twice and he beat me twice.

I made the highest break in the World Snooker Championship against Fred Davis when I was about 21, I made 141. Then I beat that in South Africa when I made 142 and those were the championship records at the time.”

How did you mix both Snooker and Billiards, in terms of practice and cue action required?

Joe Davis was such a great Billiards player but his cue action suited Snooker also. Joe developed Snooker. I played Joe a lot, and people often don’t realise what a great player he was.”

In general, do you think playing Snooker helps a player’s billiard game? Did it benefit your Billiards, in terms of honing your cueing and potting?

“It’s the other way around actually. The cue action of Billiards helps a Snooker player, you need that good follow through. The action of Ronnie O’Sullivan and the touch of Jimmy White would suit Billiards down to the ground, and there would be other players too.

I was criticised once or twice for refusing to take a pot on at the top of the table, because I was not confident of taking the pot on, but that was complete and utter rubbish! The most dangerous shot on the table is a pot. An in-off is a piece of cake, a cannon is a piece of cake – it’s knowing where you’re going to knock the balls is the important thing – but you can always miss a pot. If you watch a player who is a good top of the table player, they’ll take a little more time on the pot. The pot can always be missed. You avoid your pots if you can. You don’t want to be playing too many pots off the spot if you are far away. You want to be playing a nice little cannon, pushing the red towards the pocket to leave an easier pot.

Generally speaking, with today’s Billiards player, they would still be able to play Snooker, but it doesn’t necessarily work the other way around.”

When you were practicing Billiards, what areas would you usually focus on?

“I would always start my practice with red ball. I would get the cue-ball and hit it up the spots. I would hit it below centre, centre, and then top, and hit it at a fair speed to try and make sure you hit the cue-ball where you are aiming to. Then I would go onto my red ball and practice that for a while, and then go on to top of the table.”

Is there any advice you would give to aspiring billiard players looking to improve their game?

“Your drop cannons are coming into it all the time. A lot of people think when you are playing a drop cannon, that you’re trying to put the white behind the spot and push the red towards the pocket. That’s wrong, I never did that. The way to play a drop cannon is to drop the three balls together, you know you will have another shot. If you try and push the red towards the pocket, it’s got to be very accurate and it can go wrong.

What you must always do in Billiards, and Snooker, is play the safest possible way…

Playing to bring the red ball back to the middle of the table [on a long loser] is very dangerous, because the red could come around and catch the jaw of the middle pocket. If you catch the first jaw you could knock the red into Baulk, or you could knock it into the centre pocket. The way to play that shot is to play it a bit thicker than you would normally play it and bring it near the pyramid spot, and then play it back up. This is a much safer way. What you must always do in Billiards, and Snooker, is play the safest possible way.

Practicing for 10 or 15 minutes is no good, you’ve got to practice for hours. You’ve got to devote your life to it.”

Our grateful thanks go to Rex for taking part in this interview. If you missed part 1, you can catch up here.

Thanks to Peter Ainsworth for the photos.