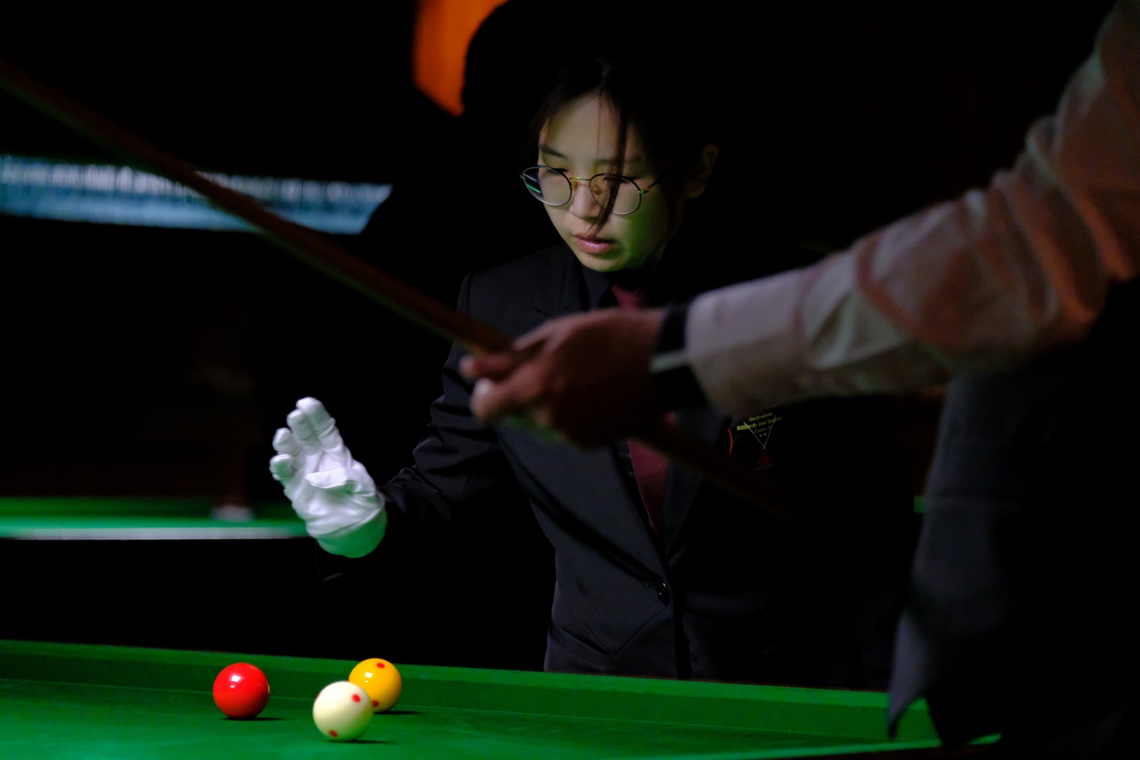 All World Matchplay (short format) Billiards Championships will be played to the Official Rules of English Billiards as published by WPBSA in November 2019, with the following modifications:

Section 3, Rule 6 ‘Playing From In-Hand’
After (b) add:
If the striker comes to the table with their cue-ball in-hand as a result of the non-striker’s last turn, the striker can play directly on to a ball or balls in Baulk for that shot only. At all other times the following will apply; (usual rules).

What this means is that if your opponent pots your cue-ball (or forces it off of the table), when you come to the table for your turn you have the option of playing into Baulk from hand on your opening stroke; effectively an open table. This will apply regardless of whether one or two balls are in Baulk when coming to the table with ball in-hand.

Several people have questioned how this rule would be applied following the initial break-off shot. As the rule is worded, the second player wouldn’t be coming to the table ‘in-hand as a result of the non-striker’s last turn‘ so therefore they wouldn’t be able to play directly onto a ball in Baulk on their first shot.

With the change of the ‘Playing From In-Hand’ rule (above) the normal ‘miss’ situation would become largely irrelevant except when you do not leave a ball out of Baulk yourself during your own visit. In this instance the striker must now hit a ball or it will be a foul and the usual penalties applied.

The Baulk-line Crossing Rule will also be applied.

Due to the nature of the 100-up format it is extremely important that the ‘Baulk-line Warning’ is called at the correct time. In the unlikely event that the referee forgets to call ‘Baulk-line Warning at 80’ at the correct time (in a break), the onus is on the non-striker to highlight the error. If this is not corrected immediately it will be possible for the striker to win the game with a 100 break without crossing the Baulk-line.

The aim of the modified rules is to discourage negative play and keep the game flowing. There is now provision for the stalemate situation where the referee can initiate the procedure below. For example, occasionally a bout of safety arises with players playing back and forth, tapping each other’s cue-ball along a cushion.

If the referee thinks a position of stalemate exists, or is indicated by both players, they shall offer the players the immediate option of a re-string.
(a)  If any player objects, the referee shall allow play to continue with the proviso that the situation must change within a stated period, usually after three more strokes to each side but at the referee’s discretion.
(b)  If the situation remains basically unchanged after the stated period has expired, the players shall be required to string, with the winner of the string having the choice of whether to play the next stroke. The game shall continue from the starting position (Section 3 Rule 2 (b)). The scores are not affected.