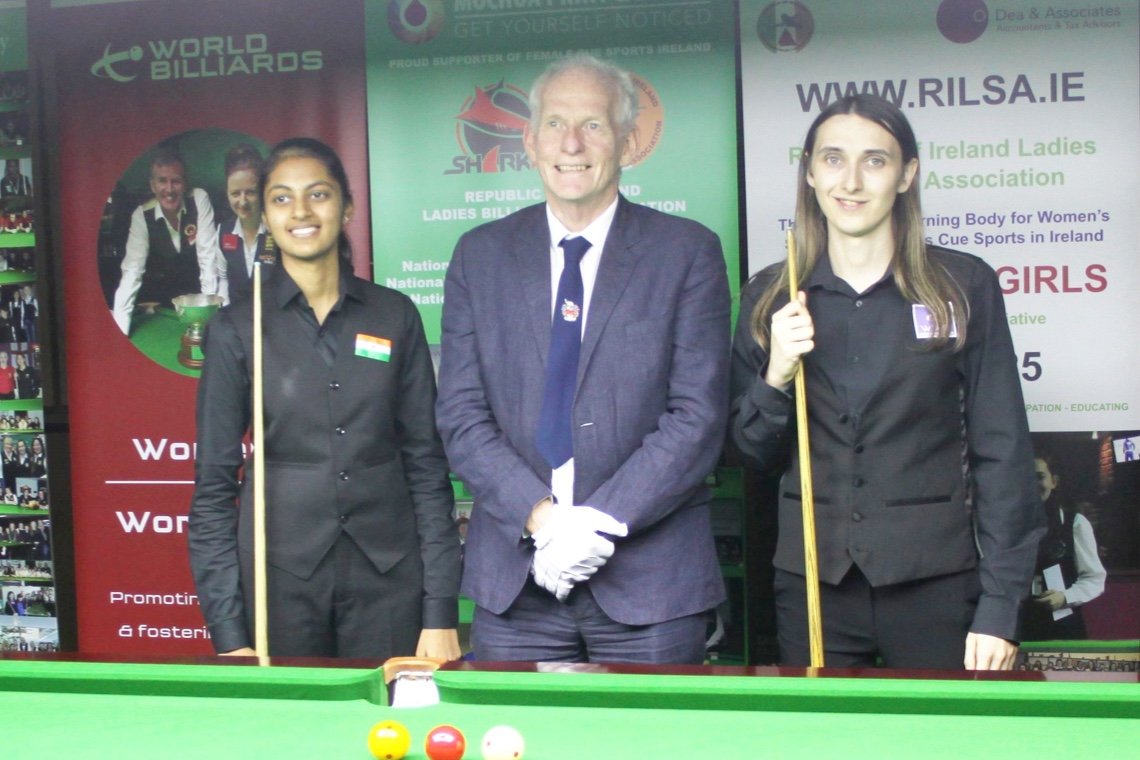 Jamie Hunter from England won the World Women’s Billiards Championship title at the RILSA Academy in Sharkx, Newbridge, adding this to her Women’s European Open and English Open titles which she won last season.

This is the first time that Ireland has hosted the Championship since it began back in 1931.

During the round robin stage of the Championship, we would witness highs and lows as the players began battling it out on the green baize to see who would take the title, previously won by Anna Lynch from Australia in Melbourne in 2019.

In session one, Group A saw Annette Newman, Women’s World number 3, see off a challenge from Joanna Ward to take the win as the bell sounded, 121-70. Margaret O’Driscoll, playing in her first event on the women’s circuit, was up against India’s up and coming young Billiards star Snenthra Babu with Snenthra taking the win 119-65.

Group B started well for Jamie Hunter taking a good win over Tina Keogh, 223-58, while Stephanie Foley finished well against Valerie Maloney to close the match out by 88-62.

In the next session, O’Driscoll upped her game against Christine Carr to run out 139-77 victor. Snenthra continued her good form and took the win against Ward 153-63. Meanwhile, Hunter played solid Billiards with consistent breaks, taking the win against Maloney by 274-45. Foley defeated Kehoe by 83-57.

Session three saw Newman start well against Snenthra but after 20 minutes Snenthra upped her scoring to take an eventual win by 182-83. The match between Ward and Carr couldn’t have been closer as the former claimed a win by 106-105. On the other table, there was no stopping Hunter in her match against Foley as she made a string of consistent visits to win by 242-72 and top the group. Foley finished second and therefore secured her semi-final spot.

Sessions four and five saw Newman take her second win in the group, 154-82 over Carr, and O’Driscoll defeating Ward comfortably by 176-42. Snenthra had a similarly strong performance against Carr by 155-54 to complete a clean sheet of wins. A close match between Newman and O’Driscoll resulted in the latter taking the win by 139-94 and qualifying through to complete the semi-final line up.

In the semi-finals, Jamie Hunter had to dig deep against a very strong effort from Margaret O’Driscoll. The scores were mostly level until the final 10 minutes when Hunter made a few small breaks to maintain a lead and complete a 140-106 win.

On the other table, Snenthra Babu played solid Billiards and kept Stephanie Foley away from the table for long periods along with good scoring and safety play to finish with the win by 188-30 and set up a final with Hunter.

The 90 minute final between Jamie Hunter and Snenthra Babu was nip and tuck in the early part of the match, despite Hunter staying in front. The last 20 minutes of the match saw Hunter capitalise and take a 304-148 win, becoming World Women’s Champion at her first attempt and maintaining her unbeaten run on the circuit.

A Challenge Cup was also held, for players not qualifying through the group stages, this was won by Christine Carr defeating Annette Newman in the final.

World Billiards Director Aonghus McAnally and Tournament Controller Dan Carroll presented the trophies including medals and certificates for all players.

You can see a full list of the results here.