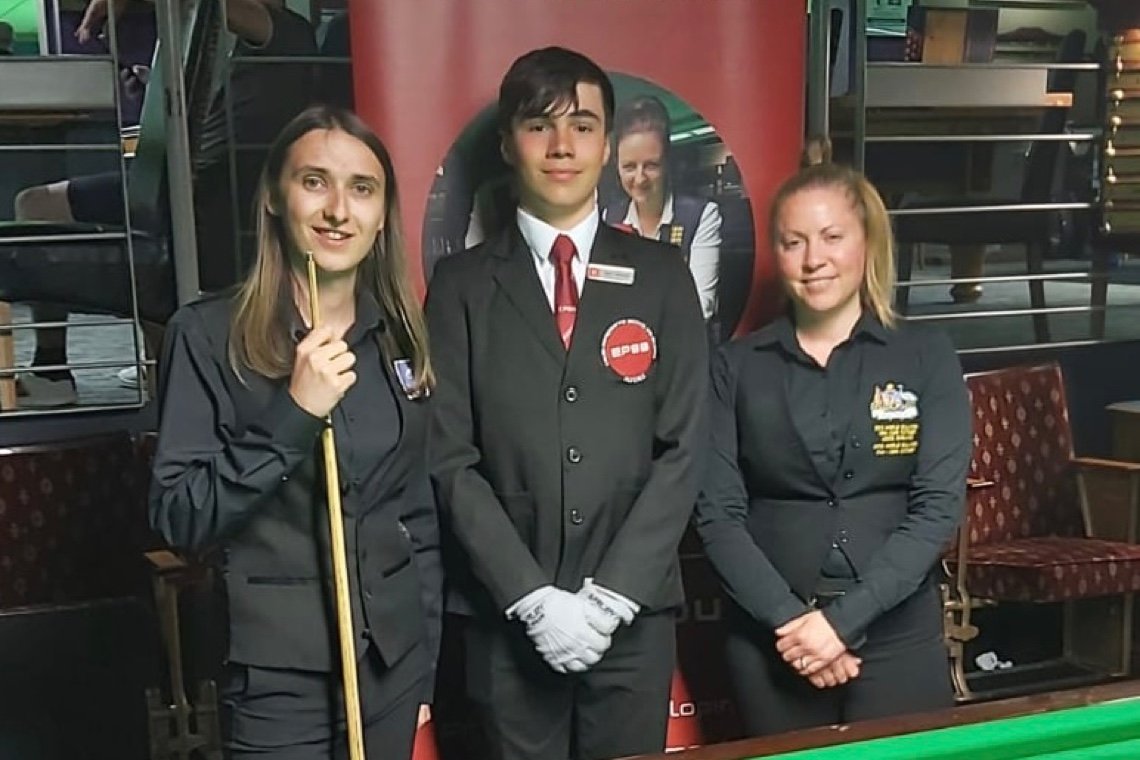 (Jamie Hunter, left, with referee Harry Grimmett and Anna Lynch before the final)

During the round robin stage, session 1 of Group A saw Jamie Hunter take the win against Stephanie Foley (Ire) 156-60, while Anna Lynch had a comfortable win over Joanna Ward (Ire) by 185-38. Hunter and Lynch registered a number of 20+ breaks in their matches.

In Group B, Rochy Woods (Eng) had a good win over Annette Newman (Ire) in their match by 120-80 while Tina Keogh (Ire) won her match against Christine Carr (Ire) in a close finish by 67-57.

In the second session of Group A, Hunter steamed ahead with strong scoring against Ward who struggled to get a hold on the match, Hunter had breaks of 66, 33 and a number of 20+ breaks to finish comfortably 269-22. Lynch played solid Billiards against Foley in their match to take the win at the bell by 145-40.

Group B saw Woods put up a good performance against Keogh, completing with the win by 177-45, while Newman upped her game against Carr to run out a 134-78 winner.

The final round robin session in Group A would see a close encounter between Lynch and Hunter, with the former in the lead for most of the match, but towards the final few minutes some useful visits from Hunter enabled her to take the win 149-128. In Group B, Newman earned her second win in her group against Keogh by 99-38 to see her qualify out of the group along with Woods, joining Group A qualifiers Lynch and Hunter in the last 4 lineup.

Hunter continued her strong scoring against Newman in their semi-final match with breaks of 35 and 63 along with a number of smalller breaks, keeping Newman away from the table for long spells. As the bell sounded, Hunter took a comfortable victory by 276-59 to see her through to the final. On the other table, Lynch kept to form with a number of good scoring contributions towards the end of the match to seal the win against Woods 188-116.

The final between Jamie Hunter, who was going for her second consecutive title on the women’s circuit, and Anna Lynch was close all the way until the final 15 minutes when Hunter gained a useful advantage with a number of 20+ breaks. A further break of 38 break from Hunter would prove to be decisive as she ran out 189-143 winner to claim the Women’s European Open title.

The final of the Challenge Cup was an all Irish encounter, won by Christine Carr in a very close match against Stephanie Foley by 47-41.

Grateful thanks go to our hosts, the Northern Snooker Centre, and referee Harry Grimmett.